The GK cowherd is a select group built around foundation females purchased through Australian dispersal sales, combined with females resulting from imported Canadian embryos and Canadian donor dams we have selected ourselves. We place great emphasis on udders, feet, temperament and the ability for a female to calve easily, raise her calf well with no creep feeding and go back into calf under natural Queensland conditions.

We believe in using the show ring as a shop window for our product and we believe in doing it right. Some breeders assume that because our show team is turned out professionally, that our entire cow herd is spoilt and doesn’t have to work. This is most certainly not the case. Because our operation is run under limited land space we have absolutely no room for poor performers, or for cows to have a second chance. No exceptions, Sydney Champion or not. 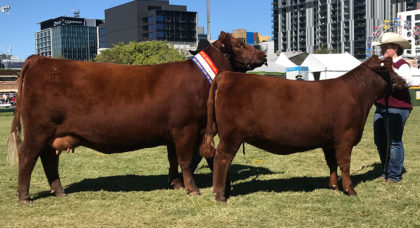 Imported from Canada as an embryo, M16 is from the famed Canadian Diamond Mist cow family and has an impeccable pedigree, being out of the past Agribition Champion Diamond Mist 290P, and sired by breed legend Red Fine Line Mulberry 26P.

M16 was Senior and Grand Champion Red Angus Female at the 2019 Brisbane Royal Show and her first daughter topped the female section of 2019 Power of Red V Sale at 7.5 months. 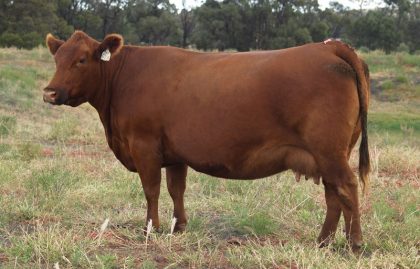 This powerhouse of a cow is a consistent producing daughter of Red Brylor SDL Pasquale, from the Dina Cow family.

She has produced a number of top sons over the years, including GK Red Mutual Fund M34 who topped the Power of Red Sale in 2018 for $8500 ,and Queensland Tradition Q12 who is currently in our 2021 show team. 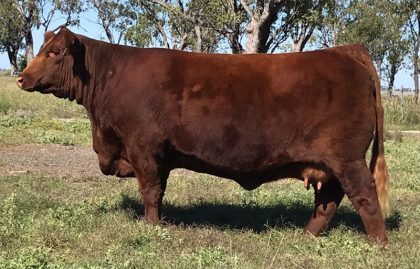 GK Red Platinum Ruba P26 is an outstanding young daughter of 2017 Urquhart trophy winner, Ruba G40, and is sired by Red Double B Bullseye 1B.

P26 was Supreme Exhibit at the 2020 Angus Youth Roundup for Brooke Iseppi, following her Junior Championship at the 2019 Brisbane Ekka at 10 months of age.

She was turned out for the year in 2020 after Roundup in January due to Covid-19 lockdown, and is now in production with a beautiful udder. We look forward to adding her to the donor pen and showing her at Rockhampton’s Beef 2021 and the 2021 Brisbane Ekka. 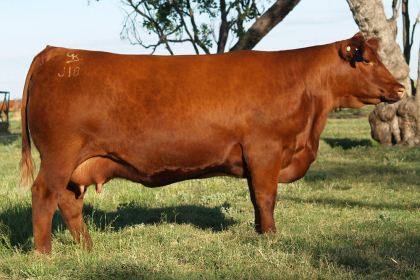 This magnificent daughter of GK Federer was named Junior Champion heifer at the 2015 Sydney Royal Easter Show and Champion Cow at the 2016 Angus Youth Roundup.

The Tinsel cow family originates from Brylor Ranch in Canada. 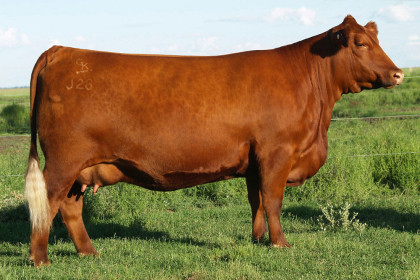 J28 is another feminine, high capacity Federer two-year-old whose dam X9 was one of our very best old cows. Cherok X9 was imported from Brylor as an embryo and is a member of the well-known Brylor Cherok cow family. Bella B30 is sired by Xtra Flash and out of the old Bella R512 cow, making her a full sister to Arabella A30 and Federer F23. B30 is a powerhouse female that has the ability to reduce birth weight and maintain rapid growth rates in her progeny. 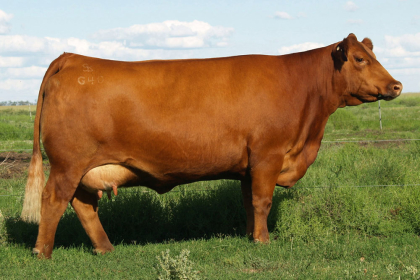 This beautiful, easy keeping, deep bodied, Mulberry daughter was one of the last daughters we put on the ground out of the fantastic old Ms Ruba 7H cow. 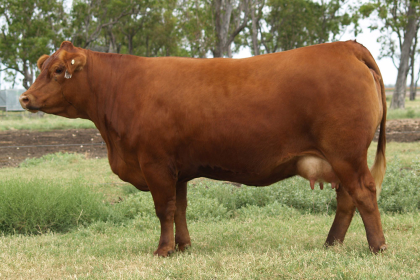 J2 was purchased in 2015 as a bred heifer from the Alliance partnership, who imported her as an embryo from Willie Altenburg’s Altenburg Super Baldy Ranch in Colorado.

She is a superb uddered daughter of Canadian Sire Spring Creek Lotto 52Y. Her dam is the ASR Little Molly cow, making J2 a complete outcross to most Australian Simmental genetics.

We are looking forward to her embryo calves arriving in 2017 and 2018. K278 is a powerful deep bodied female selected from the Baker family in South Australia. She is the result of an imported embryo from Lewis Farms in Alberta Canada.

She is sired by LFE Red Casino 3036X and out of the KJLI Razzle Dazzle 628R female. We have high hopes for this fantastic young heifer and look forward to seeing what she can achieve in our program. 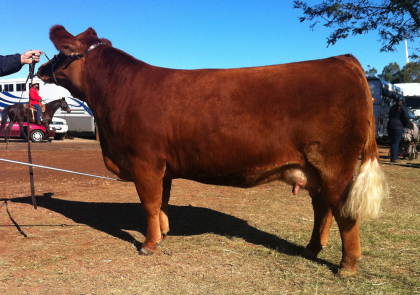 Hobbs Livestock Keepsake H006 (P) aka “Honey”, was the first foundation female purchased for our Red Simmental program in August 2013. She is the result of an imported Lewis Farms embryo from Alberta in Canada and has turned out to be a magnificent cow, with an absolutely fantastic temperament.

Her first calf GK Que Sera was named Grand Champion Bull and Best Simmental Exhibit at the 2015 Sydney Royal Easter Show and sold to Woonallee Simmentals at thirteen months of age. We look forward to embryo calves out of “Honey” sired by HRC Firepower arriving in Spring 2015.